I made this oscilloscope device using the Daisy Seed. There’s a thread about its development here (click through to see code):

Is an Audio In OLED oscilloscope possible? Software Development

Here’s the final mark 1 build! [DaisyScope mark 1] Surprised myself by figuring out how to implement horizontal scaling, other knob is vertical scaling. There’s one last thing that I can’t figure out though. If there isn’t a stereo plug plugged into the output, and if it doesn’t then lead to a stereo input, then the pots behave as if there’s grounding issues. AGND and DGND are bridged, and the audio jacks and OLED screen work fine regardless. I’d like it to be fully functioning ev…

All that’s on it is audio in and out sockets, an OLED screen, and two potentiometers for adjusting the horizontal and vertical scale of the oscilloscope. The audio I/O is just meant to be a bypass, but I also intended for the device to be used with input only. However, when the output socket is not being used the potentiometers behave in a manner consistent with ground issues (such as a fault between AGND and DGND). Here is a video of the problem in action (no sound): 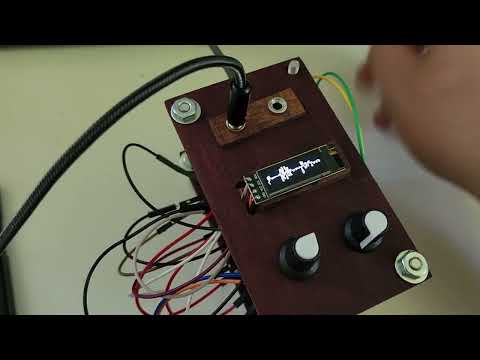 Everything also works fine if the input socket is not used, as long as the output socket is.

One last thing as I was trying to measure values while testing. Weirdly, regardless of configuration, Serial seems unable to read the potentiometer values. Even if the configuration is “right” and the potentiometers work correctly in practice, Serial.println(knob) only reads out “194” (or “192” in the case of the other knob).

Here is a rudimentary wiring diagram of my device: 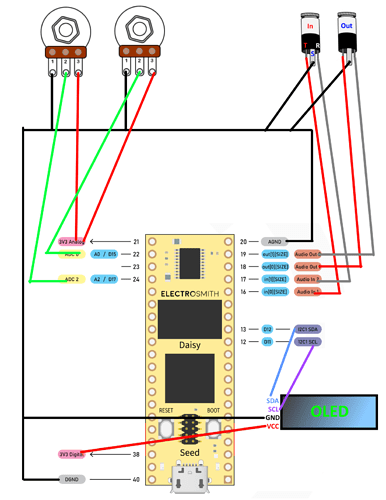 Just to confirm - are you using stereo jacks? NOT shorting jacks?

I’m using stereo jacks, these ones to be specific https://www.amazon.com/gp/product/B01C3RFHDC/