Do you think this is possible (for a noob)

I would love to build something like this. Do you think its possible, Where would you start trying to learn how to build this.

At its core function RXS is a hardware version of the Dr Octorex by Reason Studios, a sampler with midi file looper all in one. You press 1 button and a midi clock sync’d .mid file triggers notes C2(36)-G9(127). 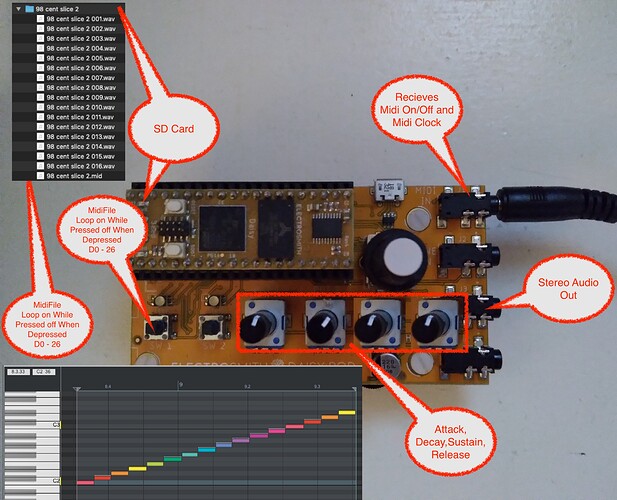 Info
Most hardware looping stations rely on time stretching algorithms to not change the pitch while changing the tempo. This leads to a stretching stuttering sound effect if the loop is played a slower tempos, which sounds unnatural.
The principal idea of RXS is to alter the tempo of a music loop without changing its pitch or otherwise altering its sound. Using Reason Studios Recycle, loops are “sliced” into a series of separate “beats” or “hits”. By altering the timing of these slices (or even quantizing them) with out altering the length of them, a loop can play at different speeds whilst using unmodified sounds for each slice or beat/hit. This process preserves the original pitch and sound of the loop while allowing a greater variety of speed/timing tweaks vs traditional stretching algorithms.

well i guess i’m SOL back to grill again

I wrote a simple sampler for the seed:

Use this as a starting point and start simple! Then slowly add the functionality you want.

yeah definitely possible! The pod would be a good match for this, especially if you mainly want to control it via midi. You can use MIDI CCs so you’re not just restricted to two knobs.
Staffan’s code is a great starting point!