I’ve been a Max user for many years (and am learning Gen~) and I recently purchased the Patch.init() for Eurorack module development.

When I send this simple gen~ test patch to the Patch.init(), the CV and Gate outputs do not stay at the their expected voltages.

Here is a visual example from VCV rack’s scope. The gate I’m sending is high, but the Patch.init() ramps down to zero shortly after the onset. 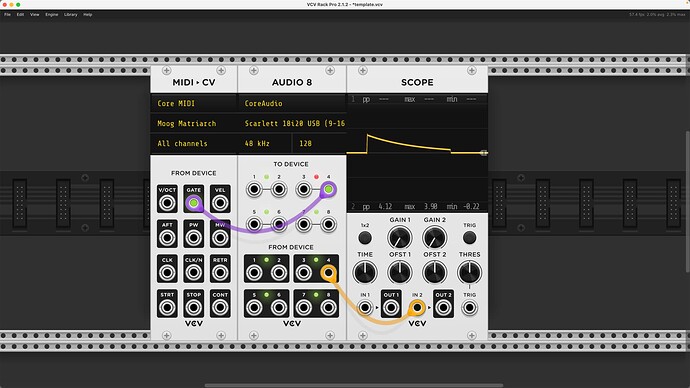 What am I doing wrong?

Thanks for checking it out with your equipment! Glad I am not crazy!

I just loaded the patch_sm envelope example and the same issue occurs. The gate won’t stay high and reverts back to 0V.

Maybe I just have a defective unit?

Scarlett is AC coupled, normal for an audio interface.

At time of writing no Focusrite products have DC Coupled outputs. This means that you can't use the outputs on Focusrite devices to send Control Voltage (CV) messages to external synthesisers (or o...

I should have mentioned that I have the signals coming in and out of a Bored Brain Optx which connects to the Scarlett via ADAT. It allows DC coupled signals through.

The inputs on Optx aren’t DC coupled. Is the Patch,init gate plugged into Optx input?

I totally thought both inputs and outputs were DC-coupled on the OPTX! Thanks for letting me know. Good thing I have an ES-3/ES-6 laying around. I’ll begin testing my patches with that instead.