hello! more problems have appeared while going forward with the project im working on…

along with the SD card reader plugged onto the Seed which i have been debugging for quite a while on many fronts and which i plan to use mainly for audio sample playback, i also have an electret mic hooked to a preamplifier circuit (pulled from the Adafruit MAX4466 breakout board) which is meant to be used for basic voice detection and real-time analysis. it is currently powered with the analog 3v3 and AGND pins, with the amplified signal sent to an audio input pin. the production board i’ve put together also includes a DC jack for a 5V 4A power supply with a 1000uF cap next to the connector on the board; this 5V power is fed into the VIN pin, and nothing else. 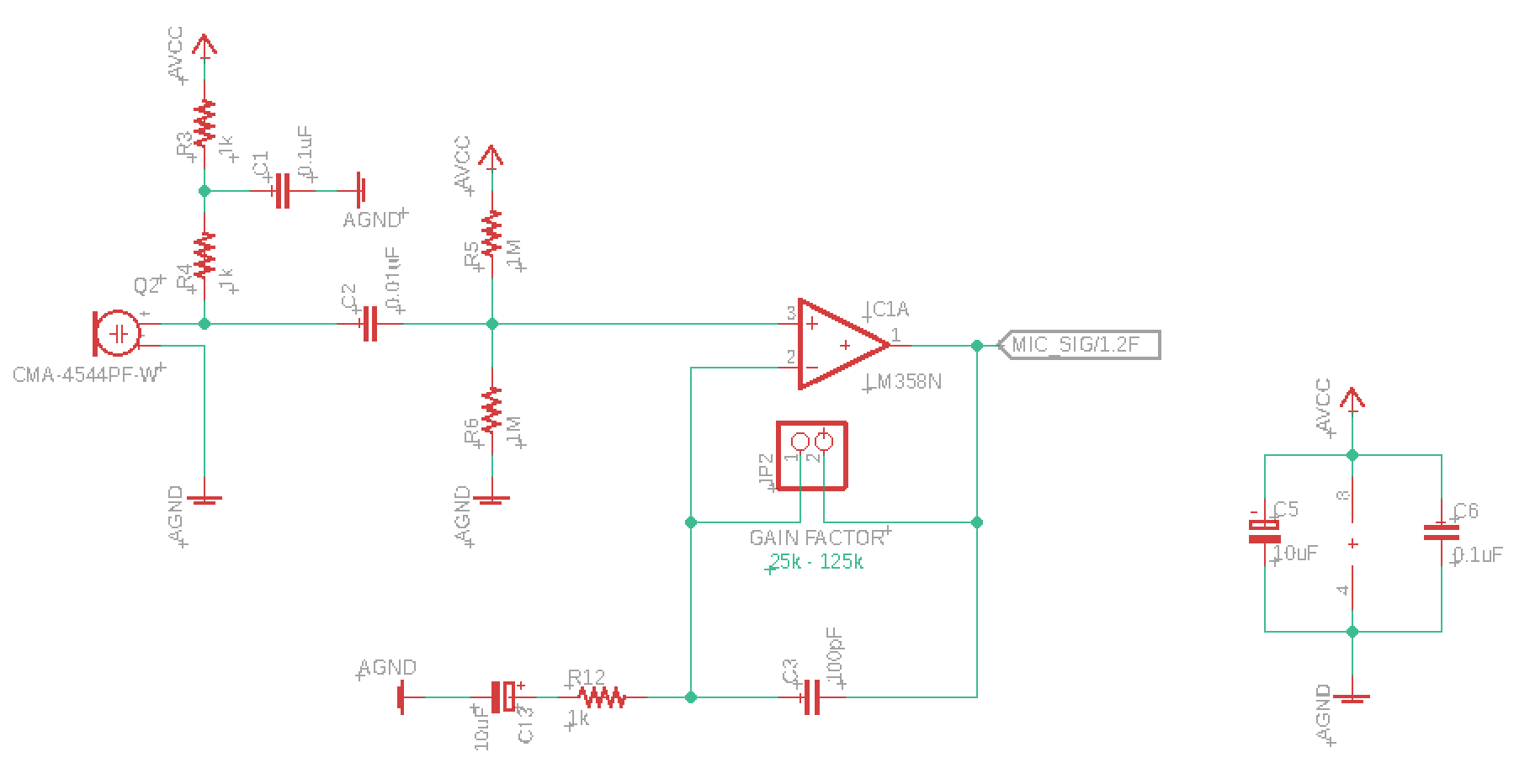 an important thing to note is that i changed two things from the original circuit: 1) no ferrite beads between VCC-AVCC / GND-AGND because i didn’t want to order them and i assumed the internal Seed circuitry took care of it already; 2) i used an LM358 instead of the MAX4466 from the original because fidelity isn’t a concern for my use case.

upon streaming the input directly to the output (out[i] = out[i+1] = in[i]) and listening back on headphones with a TRRS breakout, i noticed an extremely loud buzz being picked up from the input signal. upon extensive testing, i concluded that the SD card was responsible, since removing all calls to Prepare or Stream in the code would successfully remove the buzz. the hunch was reinforced when interacting with the component: the buzz would increase in volume when dragging my hand/arm over the card reader itself, and nothing else, and decrease as i pulled it away.

is it possible that my usage of the analog power pins to drive the preamp/mic enables this harsh buzzing? the microphone’s ground pin is directly hooked to the analog ground of the Seed (and the sleeve of the TRS audio jack), so maybe i would need to “isolate” the ground for the preamp? if so, would it help to add ferrite beads into the mix again, and where?

otherwise, how should i go fixing this issue? i’m mostly certain this is something wrong with my circuitry, not so much with the actual hardware, be it the Seed or the SD reader. i’m not extremely versed in electronics to begin with, so any help would be appreciated

thank you! and let me know if any more information is needed.