Back at the daisy and having tons of fun. This platform is quite capable!

sounds rad! any possibility of making a Field/Patch version with a visual interface in the future?

Yeah - I just took the plunge into eurorack and purchased a patch today - so I’ll be able to start that soon…!

That sounds great!!! Thanks for the update.

Friggen awesome! I have a XVI 16n faderbank and a pemanent routing from it’s midi to the daisy to control the patches I make in Max/Gen.

It would be fun connecting the faders to the FM stuff.

I can speak nothing about the difficulty of this. But if it took 2048 sample wavetables, no morphing, just the single tables, it would be pretty insane. Then you can just export serum individual tables and have a crap ton of stuff to work with.

The anticipation is now killing me

Hah me too. It’s all working - VA with some new features, and now a 6 op FM mode.

All of the work has pretty much been in the UI, I’m like 99% there, ironing out the last few issues.

To be honest I’ve considered seeing if there was anyone running the field that would want to try out a beta version, the documentation for this will take a bit of time in itself…!

I’ve got a pod version running and will move to the patch once this is released - with the core re-do I already have done that will by no means be as much work. 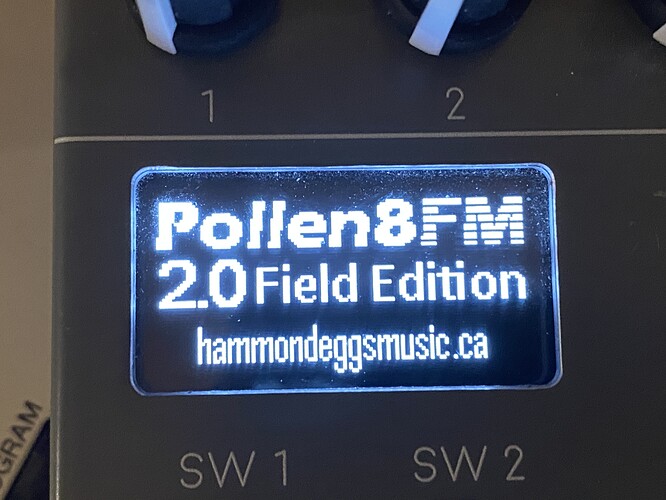 The algorithm select page reminds me of a shift pattern. Now where is that “R” operator… 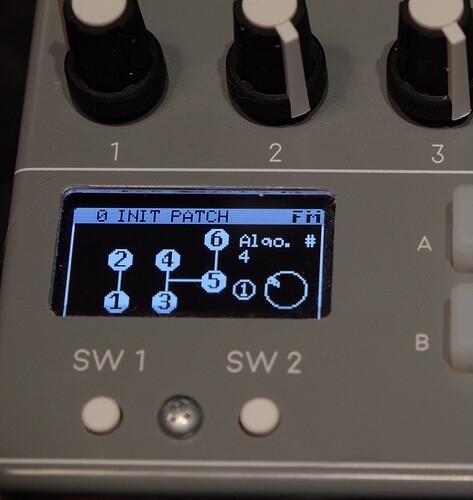 That looks amazing! Looking forward to it.

Fully fully ready to test your betas over here on my field @hammondeggsmusic !!!
The pocket synth (plus external controller

Cool! Overall, the core / UI etc for the field is actually… done! With ~96 bytes to spare too… For the Pod, the trouble is, is that now - there are just too many menu items for a two knob - two button - two led platform to make “reasonable” sense as a UI (it’s changed a lot from 1.0…!). “Patch” will be a bit easier to implement as there are 4 knobs and well, the display. So porting to that will likely be quick, but I will be releasing the field version first.

For the pod though, I’ve currently developed a PC application to run alongside the pod to help you set up the synth / assign CC values / program any presets, and you could run the pod standalone once you’ve set the synth up to your particular controller. It gives you a virtual display (super-handy for screencaps for the documentation as we speak), as well as virtual control of the parameters etc.

The issue with that also, is myself - I’m on windows - and this is a .net app. Rumour has it that the mac can run .net but I simply do not have a mac to try it out on. Maybe someone here with a pod and a mac might be hip to giving something a try sometime…

Either that… or I suppose I could remove the PC GUI interface and add a simple command-line terminal like interface to the usb serial interface for the pod, which is more work.

I just got a Pod and will be loading Pollen(8) on it as soon as I figure out how to connect the hardware.

For downloading images / programs to your pod, you actually program the “seed” board plugged into the pod - so you want to use that particular usb. This is also your power connection.

The sd card should be formatted with FAT32. The files are tiny, a 2GB card is beyond plenty. You will see two green flashes from the leds on power up to indicate a successful drive mount.

At the time Pollen8 1.0 was written, much of the Daisy framework was still pretty new and some stuff was still in a state of flux…so it is my implementation. 1.0 does not have CC support except for hold pedal / mod wheel.

Now, FYI 2.0 is about to release. The first release of this version, is for the Daisy Field as this is what I developed it on. It has a lot more features from 1.0 (including programmable CC support, FM, more LFOs etc), and, it can run on Pod - but controlling all of the new features would admittedly be a bit tricky with just 2 knobs / buttons / leds. So a companion app (.net, so PC with mac possibility if I can get someone to test that) will give you control of the pod - even if that’s just to set up the CC stuff to run it standalone later etc. Patch has 4 knobs plus the encoder / display, so a UI for that on the board itself is likely.

Do note - Pollen(8) 2.0 does not use the sdcard, it uses the internal flash. So, patches made in 1.0 will currently not port over.

Though, if there is a real need for that I could create an app you download to promote the old 1.0 stuff from an sd card to the new format. As always a matter of time and priority etc heh.

Thanks! I’m on Windows 10 so I can use the existing companion app. I also have WSL 2 but I don’t know if it can talk to USB yet, three NVIDIA Jetsons (ARM64 Ubuntu 18.04) and two Belas.

The Pod is the smallest computer I’ve worked with since the Commodore 64; it’s going to take a bit of getting used to.

That looks like a pretty amazing update! Electro-smith should be paying you

In theory .Net should be cross-platform … but it also might make sense to document the serial protocol, then someone could help out with other clients. Or if the midi CC covers all/most of the parameters, someone could make a panel in CtrlR or similar. (I hate to say “someone” for these without volunteering myself, but sadly can’t really commit to something like that right now)