Just got my Patch.Init(). I’m trying to connect it and send some example code. But it does not seem to work.
I’ve tried using oopsy daisy on Max, and I’m getting this error:
oopsy-verbose: “No DFU capable USB device available”

I’ve already did the bot + reset, and the laptop can find the “DFU in FS Mode” to connect, but it does not seem to connect. I’ve noticed that the “user led” is not turning on on my board. Just the PWR led.
I can’t make the User Led power on.

If you are on Windows you might need to use Zadig to select a different USB driver. Here’s instructions I copied and pasted:

To begin, download Zadig. Use the most recent version.

Launch Zadig and then put the Daisy into bootloader mode by holding BOOT and pressing RESET.
Click the Options menu in Zadig and select “List All Devices.”

In the drop down menu inside the main window, select “DFU in FS mode,” followed by selecting WinUSB in the target driver box.

Click “Replace Driver.” Zadig will update to the appropriate driver to flash Daisy.
These instructions are also in the Windows Toolchain Install Wiki page on GitHub with screenshots.

edit: To clarify, Zadig is not only for command line programming but can be used for the Web Progammer as well on Windows. It should fix the connectivity problem if the USB driver is to blame.

I just tryed updating my Patch.Init() drive with Zadig… it does not seem to work.

I can relate my problem to this guy:

I found the youtube movie: PAW 2020 • Livestream Andrew Ikenberry - Electrosmith - YouTube I do as shown there, but for me the Program button remains disabled.

It seems to be the same problem. Only difference I am on Windows 11.

I am also getting a hidden error (CTRL+A) on top of my Daisy Web Programmer page:
SecurityError: Failed to execute ‘open’ on ‘USBDevice’: Access denied.

I also find it strange that there is just 1 led ON at my board… The PWR led. 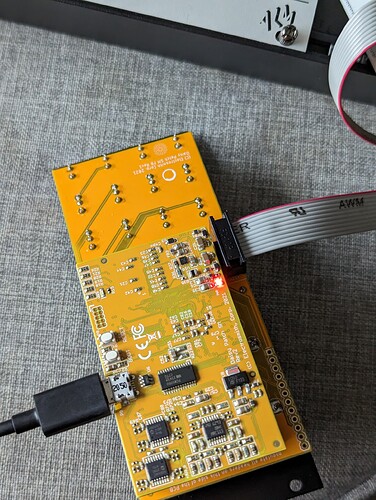 It is normal for only the PWR LED to be on. The other LED is controlled by whatever program you’ve loaded on the Daisy. It’s not very useful, except when you use the Blink example to verify that you can program the board.

Just to confirm - you ARE using the Chrome web browser?

Yes, I’m using Chrome. But I don’t thing it’s a browser problem…I think it has something to do with Daisy software…If I try to build from Max using oopsy, I also get errors: 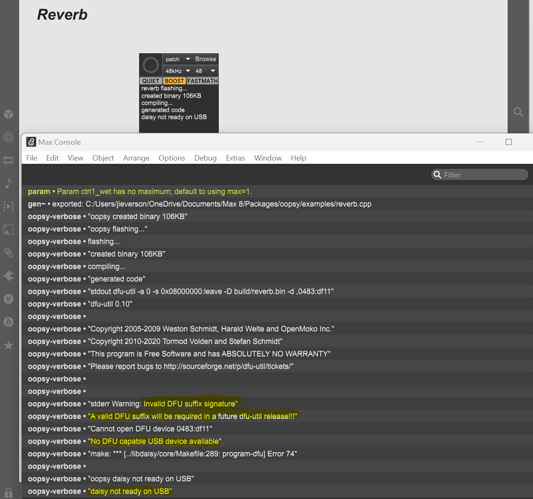 Considering this and the “SecurityError: Failed to execute ‘open’ on ‘USBDevice’: Access denied.” from Chrome, I think it has something to do with Patch been read-only or something. Or could it be an access problem? I have no idea.

One thing at a time. Before trying anything else, verify that the sample programs load and run from the Web Programmer. The other things (oopsy, owlsy, DaisyDuino, etc.) will only add confusion if you can’t load the examples.

(I don’t have Windows, I use a Mac, but this should all work the same)

It’s possible there is something wrong with your Daisy, but quite unlikely. Most likely, user error, Windows USB weirdness, or a bad USB cable.

Also note: the LED on the panel of Patch.init() is wired to one of the CV outputs - so it won’t lilght until you load a program which drives that CV output.

If DFU in FS Mode doesn’t show up in the list, could be a bad USB cable, or you didn’t push the buttons correctly, or the Daisy is broken

Sure I can select DFU in FS Mode: 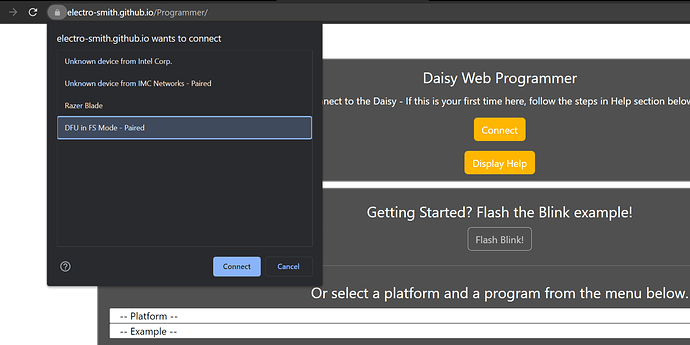 The problem is, the Program button never becomes active, so remains unclickable.

I also get a hidden error on top of web page, that can just be seen when the text is selected.
I alread posted a screenshot of the error some messages ago, but the message says:
SecurityError: Failed to execute ‘open’ on ‘USBDevice’: Access denied.

Sounds like a Windows thing to me. Good luck.

I think it’s a driver issue…

I found this link: 7. Troubleshooting · electro-smith/DaisyWiki Wiki · GitHub
It suggest that I: Open Zadig, and reset the driver for the Daisy (“DFU in FS Mode”) to WinUSB (instead of STTub, or usbser).

But when I try to open Zadig, my current driver is not STTub or usbser… it’s GuiSTDFUDev:

And if I try to flash… I get a success message, but the driver does not change… it stays as GuiSTDFUDev.

It seems to be a problem with the Thrustmaster driver (I use it to play Microsoft Flight Simulator).
I just uninstalled it, flashed WinUSB to my Patch.init(), and not it seems to work fine.