Oopsy : Issues getting Petal to run at 96kHz

I’m having trouble with certain [gen~] patchers working on the Daisy petal at 96kHz. Trying to whittle it down, but was wondering if anyone has had similar issues. The tl;dr is that some patchers seem to only work at 48kHz and it doesn’t seem linked to patch complexity / DSP usage, at least as benchmarked from within Max.

For example, the [gen~] below will only run at 48kHz. It’s a high order crossover… knob3 controls the crossover pitch - left output is the bass; right output the treble.

Any thoughts most welcome.

The performance response on the Daisy hardware can be quite a bit different to in Max, due to different CPU architecture, float bit depth, and so on; but one good thing is that on the Daisy it is much more predictable. E.g. if a patch works at 48kHz but not 96kHz it is almost certainly CPU load; at 96kHz the CPU load is almost exactly 2x the CPU load at 48kHz.

If you have the Patch or Field, you can see the exact CPU usage on screen. If the CPU usage at 48kHz is around or above 50%, it will almost certainly not work at 96kHz. If you don’t have Patch or Field, you can observe the flashing of the LED on the Seed. It flashes at 1Hz, and the pulse width indicates CPU load: if at 48kHz, the LED is on for more than half a second, then the CPU load is >50%, and it won’t work at 96kHz.

Increasing block size also has an impact on CPU load, but that’s more logarithmic – there’s almost no difference between BS=48 and BS=16, but below that the CPU starts ramping up quite quickly.

Some operations are more expensive on the ARM CPU – using the “FASTMATH” option might lower CPU usage, or using fast approximation gen~ operators like “fastsin”, “fastcos”, “fasttan”, “fastexp”, and “fastpow” can sometimes make a significant difference.

Using stereo input, or multiple codebox outputs, should have basically no impact whatsoever on CPU load.

The patcher above was missing subpatchers (xover, swtoggle) so I couldn’t really tell what was going on.

Hi Graham! Apologies for the incomplete attachment. Everything I’m working on is for an open source pedal library that’s in development: 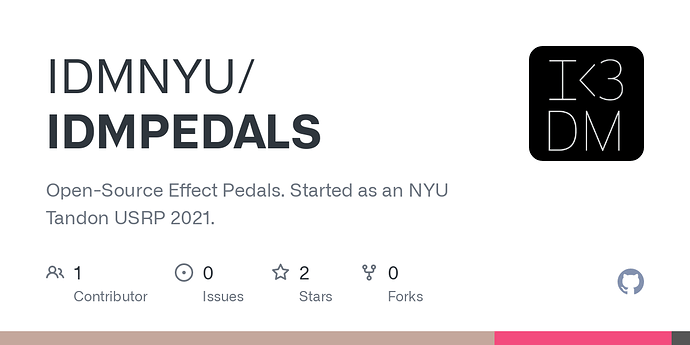 I’ll definitely take your advice and hook up a Field do see the CPU load. I’ve tracked it down some more and it looks like FASTMATH seems to help a lot as well… many thanks there.