i assembled a nice collection of effects in Gen~ i would like to flash into my Petal.
But now i am running in memory trouble it seems.

The estimated combined size is roughly 250kb, the internal memory only 128kb.
I read about flashing into the external Flash memory via the DFu tools.
https://electro-smith.github.io/libDaisy/md_doc_md__a7__getting__started__daisy__bootloader.html

But how can i compile that file using oopsy , without it complaining about the file being to big ?
Also, how can i inject the APP_TYPE = BOOT_SRAM flags into the .bin ?
I there a way to make oopsy compile a .bin that i can load via DFU into the external memory or do i need to use other methods…or is oopsy limited to the internal 128 kb for now ?

Daisy bootloader is not yet supported for Oopsy, BUT it is in an experimental branch right now. And the team confirmed with me that there is a big release for Oopsy coming up, which will include the bootloader support!!

I am still new with oopsy but i really love the way on can interact with the Daisy without writing a lot of code manually.
I guess the price for this is to deal with the limited memory, right ?
This test shows a simple 2 chan Input Output and it looks like it uses 50% of the memory for that. 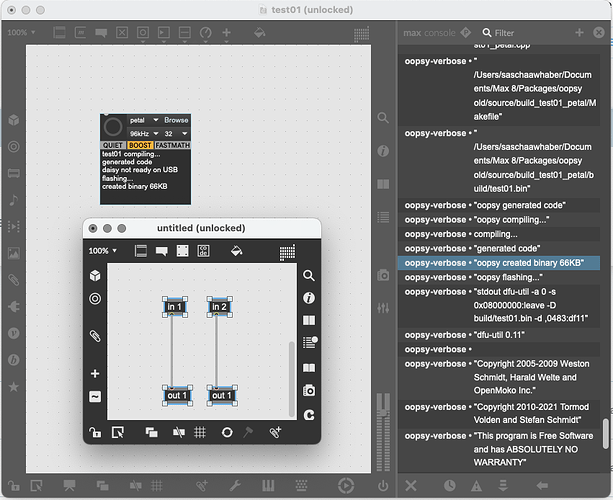 Can that be ? I guess it is all the mapping in the background it has to do, right ?
So, besides waiting for the new version, is there something else i could use to get more code into the Daisy using the bootloader but keep the simplicity of the Gen~ environment ?
Probably not, as the neat 8 step switch is part of oopsy, right ?
But hey, if there is another idea, i would be eager to hear it

Exactly, you have something to look forward to!! I’m excited about the big release too

Please feel free to join the Discord by the way! Daisy
There should be an announcement for it on the ‘oopsy’ channel. And you can also ask around for advice on getting the most out of flash memory. Speaking of which…

I flashed a program for making the onboard LED blink with C++, and it shows 49%. So my guess also is that the memory needs to be used for necessary background stuff in general (regardless of the language).

Yes, as of right now, the best thing to do is scale down the patcher that you have.

And since you have experience with Max/gen~, I also recommend giving PlugData a chance in the meantime. It’s Pure Data but with the UX of Max! And you can actually flash the patcher into Daisy all within the app. pd2dsy has Daisy bootloader support.
https://plugdata.org/