Daisy Seed Under Powered on Custom Board?

I’ve been doing a lot of development with the Daisy Patch, and finally made my own module that uses the Seed. Everything is working well so far, except for the powering of the Daisy Seed. It works fine with USB, but once I remove the USB power (then it’s using a dedicated 5v LDO), it cant seem to handle it.

First I thought it was not enough current (I had an 80mA regulator) so I changed to a 500mA regulator, but the results are the same. When I power up, the regulator drops, and sends the Seed into what seems like a power cycling situation. Is 500mA still too low? Any other ideas of what could be happening? I also put a picture of my scope when the “power cycling” is happening. 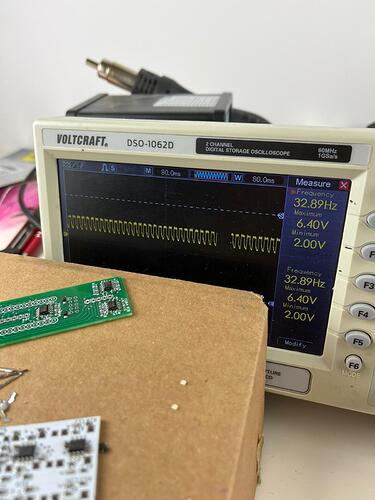 Is there large enough capacitors to absorb power peaks? The Daisy µC can be quite hungry.

There are 10uF and 1uF smd ceramics. Would you consider those sufficient? Even if they weren’t, wouldn’t a 4.4v ripple be a bit extreme?

For anyone who had/is having a similar issue and reads this, it turned out to be a thermal shutdown issue because I neglected to take into account the need for significant heat dissipation when running an LDO at maximum current output. Kind of funny, I figured it out by blowing a bit on the LDO, and this immediately stops the power cycling of the system

Wow! That’s very interesting, particularly that the results stayed the same despite switching from an 80ma to 500ma regulator. Makes sense, but I wouldn’t have expected that. Thanks for reporting that - I think you saved me from a ‘learning experience’!