I’m looking for a basic digital delay for the Noise Engineering Versio hardware. They have some great reverbs and a fun multitap delay, but nothing basic. Essentially, I’d like to have the Chronoblob 2, but in Versio format.

This would be verrrry easy to implement with Oopsy~
What do you envision the knobs and cv doing?
And what about the switches?

Hi. It’s a lot of knobs and inputs, but something like this would be amazing: 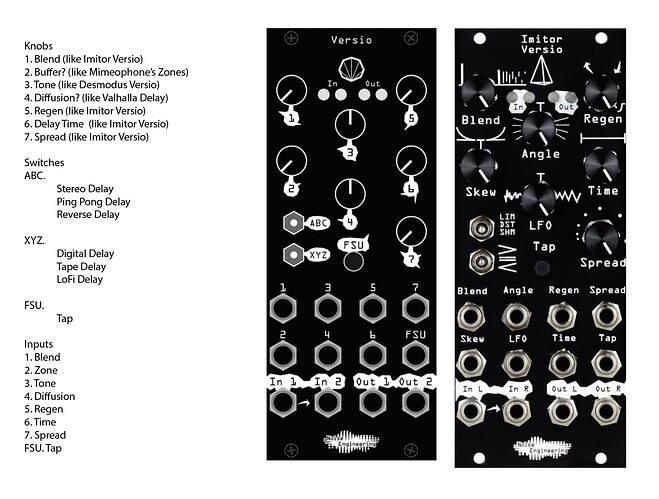 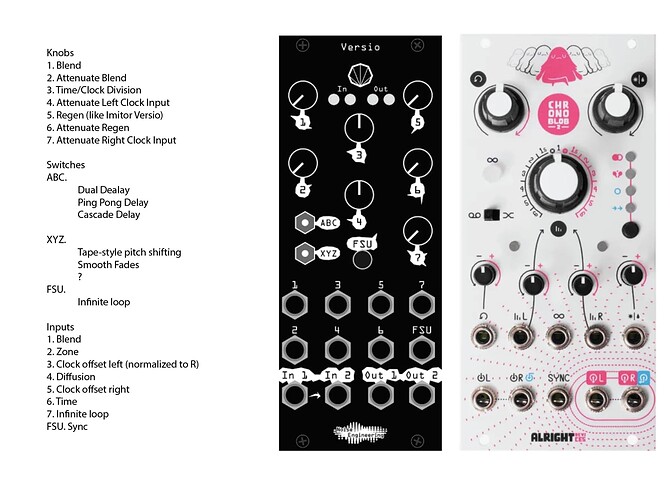 With Oopsy/gen~ you’d want to start with playing with the gen~ [delay] object. Normally this can use delay times measured in samples, so you’ll want to use the [samplerate] object or [mstosamps] to compute what you need.

You can use two [delay] objects for stereo, or just set the 3rd argument to 2 to make a 2-tap delay.

Feedback just means routing the delay output back to the input, which is possible if the [delay] operator has @feedback 1 option set. Probably you want to do this via some kind of filter – there’s lots of gen~ filter code examples that come with Max, or on the c74 forums etc.

Ping pong means flipping the feedback paths between the two delays. Try doing this via a pair of [mix] ops for variable pingponginess.

For clock sync delay times you’ll need to measure the time between incoming clock pulses; a [+], [history], [switch] and [latch] will get you there. Then multiply/divide this by an integer to get clock divisions.

There’s lots more you can do of course, and there’s other stranger stuff like granular and pitch/time shifting etc. if you work with a [data] object instead of a [delay] – again, tons of example patches with Max & on the web.

Daisy is perfect for making these kinds of modules, with absolutely huge amounts of memory for long delay times.