Do you folks know of a good tool (open source or proprietary), for profiling and analyzing audio in the frequency domain? I know nothing, so I can’t figure out what would be a good profiling tool and what would make another software tool less fit for my purposes. The main purpose for this tool is to give myself visual feedback in the frequency domain, so that I could better understand the characteristic tone of my guitar effects. If I had a tool that could remember or profile sounds, so that I could compare their frequency responses later side-by-side that would be ideal. This is so that I could visually compare the response of the different guitar effects available to me, and modify my daisy code to emulate sounds and match frequency responses. I think, my ears are a great tool for matching tone, but if the differences are extremely subtle, then I would prefer to see a response curve or some sort of data that I could supplement with what I hear. If it could also profile the frequency response when I play individual notes at different loudness levels, that would be awesome too. In short, I don’t even know where to start looking for such a piece of software and was hoping someone here could advise.

You didn’t mention which OS you’re running. I’m using this on Linux: https://baudline.com/

It’s possible to pause recording to compare 2 version of the same audio. Or you can make a WAV file with both versions and open it.

I use an Analog Discovery 2. It’s a little pricey, but it goes on sale every once in a while, and there’s academic pricing so you might be able to get it cheaper. The Waveforms software it works with is fantastic, and runs on Win/Mac/Linux and the Raspberry Pi.

I use it just like you describe. It has two function generators, and two scope channels, so you can inject a signal into a network (a guitar pedal for example) and A/B the input and the output on the scope, the spectrum analyzer, and the network analyzer.

The network analyzer will give you a Bode plot of your target network, which you can then compare against when implementing you own.

Obviously this doesn’t get you full characterization, but it’s super helpful.

The only major downside of the device is that the scope struggles with high speed signals (<20 Mhz). 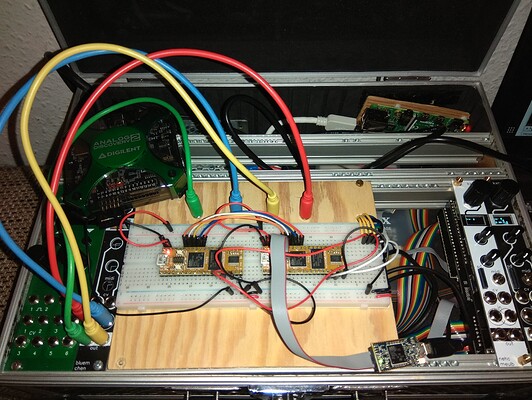 Here you see I have it connected to four 3.5mm jacks in an old kxmx_bluemchen panel; 2 function generator channels and 2 scope channels. This allows me to easily run the network analyzer through anything in my Eurorack setup. I’ve got Waveforms running on the Raspberry Pi, which I can access from anywhere via VNC. 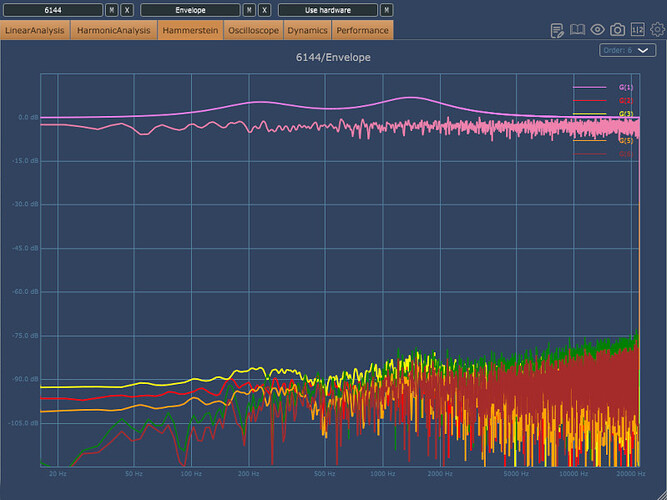 It can measure plugins by loading the vst in the software - or use hardware sound I/O to measure externally.

I’m not sure the “Scopy” software supplied by Analog does all the Audio Engineering stuff though.

I saw Plugindoctor recently on some Dan Worrall videos, and was thinking how useful that would be when developing VST/AU plugins… What I didn’t realize is that you can use your audio interface to measure externally, which in combination with my Expert Sleepers ES-8, would be fantastic.

In particular, the dynamics features gives good data about how a compressor behaves. I’ve wanted to characterize the WMD MSCL stereo compressor, and digitally emulate it on the Daisy for ages.

I’ll be buying it right away. Thanks for the tip!

use an Analog Discovery 2 .

I thought of using this, and I actually have one of these, but this is more for analyzing electronics imo. I may be wrong and it might be a great tool for audio comparison like you showed, but I was hoping to find something more specific to my goals.

OK, this actually hits the right target for me. I use Max 8, and that can load VST plugins, so that means I can use it inside Max 8 with my Oopsy object to create patches, which is how I actually wanted to do it in the 1st place. So, good on you. I think that is the right tool for me.

Plugindoctor itself us a standalone program.

It loads vsts or use hardware or virtual asio soundcards to do the analysis. You can try it before buying.

I have seen people recommending

Haven’t used it myself.

Plugindoctor itself us a standalone program.

My bad, rushing through the page, I should have read the website slower.

I took a look at this, but I think Plugindoctor is better for my purposes. Just by the fact that it can load VST, and Max 8 can export into VST if I’m not mistaken. I’m new to all of this, but it looked like the best tool for my setup.