Hey peeps, I’m a bit of a noob when it comes to hardware design and couldn’t really find the info I was after. Basically, I had the idea of using input and/or output transformers to add a bit more ‘vibe’ or saturation to audio signals running through the patch(init) or SM.

Is the submodule already isolated from external interference and already match/change impedance? Whats the maximum input/output voltage range and is there any benefit stepping it up or down voltages using transformers to maximise headroom or SNR?

I have a multiband mastering compressor I’ve made mostly in gen~ and I figured using some cinemag or similar transformers on the input and a neve or api style preamp on the output could turn it into something really special.

The patchSM (and by extention init) are designed with eurorack inpedences in mind. Looking at the datasheet, itbhas 100k input and 100r output inpedences, and +/-5v (10v peak to peak), though it can handle input and output signals up to +/-12v. In assuming inputs this hot would cause distortion though. This is so the patchSM can have input/output jacks connected directly to pins with no additional circuitry.

But with those numbers in mind it would be really cool to see some transformers on a patchSM’s inputs or outputs. I did a little research into using transformers for adding vibe to digital signals a while ago, and the general advice seemed to be cheaper transformers had more vibe. The expensive cinemags were more transparent. I ended up deciding I needed to know more about transformers and signals before spending money on some though.

If you find a transformer that works and sounds good on euro level inputs without messing with volume or inpedence on the output too much, I would love to know about it!

Patch SM is probably not the best option for this, if you wanted to go full on full on.
If you were going to go with pro audio type transformers, why not go full on and use external pro audio type AD converters? Jensen/AK5578 combo? Please.
Just my idiot opinion. What I mean is sticking a Cinemag at the input isn’t going to give you many sonic gains.
Otherwise, you certainly could find some kind of isolation transformers for unbalanced connections. I have a cheap inline 3.5mm stereo isolation transformer for using ground loop prone things like an OPZ: USB powered with a mini headphone jack. If you crank the volume, it does saturate pretty quick, BUT serves it’s purpose. Will it blow apart under Euro levels? Yep. THere are probably alternatives.

And if anyone has any leads on where i can source a bunch of transformers to play with that would be a great help.

I know that cinemag stuff is quite transparent but perhaps a certain combination might be nice albeit very expensive to experiment with. I did notice some other options for dacs too @Manysounds but I think your right, thats why i thought i’d ask.

I found one eurorack project that looked quite interesting for this type of thing. I’ll find the link and share it here 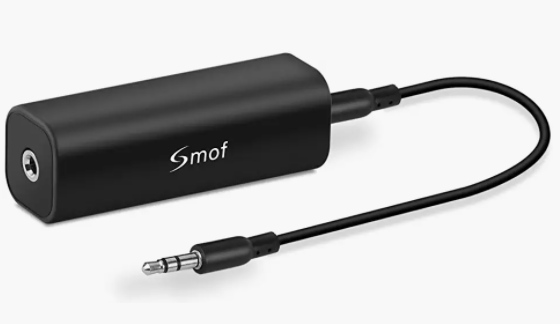 This “3.5mm isolation transformer” is cheap but grimy at full headphone volume. Strict line level it can handle without toooooo much coloration. Have I checked phase on an oscilloscope? No. Is the saturation threshold below 2 volts? Yes. Soooo, not so great for Euro levels. BUT can be modded to be dual 3.5mm mono but probably some crosstalk. A $12 experiment for you.
For Euro level audio you would probably want uhhhhhhhh… IDK what

An exact thing such as this does not exist as far as I can tell. We “might be” able to use a small circuit to step down/up the voltage with isolation, like a regular DI box with the pad in on the input side so as to not saturate the transformer (too much) but then the level would be significantly lower than Euro level.
Reality is, you’re better off building this on a breadboard with an original Daisy chip, which expects “normal” line levels. Using a Daisy Pod with two Radial JDIs would be simpler. Maybe. And more expensive

Use the MIDI input to alter settings? IDK. I’m also predominantly using Gen~ and ~Oopsy at the moment which has been GREAT but to mke the things I realllly want to I need to hack up C++ or hire somebody. The external converter thing, for example: Beyond my scope of understanding how to connect all that right now.

An exact thing such as this does not exist as far as I can tell.

I did a little research on this and found Mannequins RIP which is open source but uses very expensive cinemags, and Meng Qui please exist, which I found the circuit diagrams and transformers discussed here. Both of these shift euro levels down to line-ish levels, RIP also makes the output balanced.

I’m personally tempted to get some cheap 600:600 transformers and hook them up to euro signals. If that doesn’t work I can probably still use them with line level signals. And if not that, they’re cheap. I’ll post my findings here if anything comes of it!

Just an update… I’m very happy with the sound and results from the Vigortronix VTX-101-002 which is a 150ohm to 600hm or 2:1 configuration, its really transparent (but still nice) and drops things down 6dB, just enough to avoid ADC clipping (which really doesn’t sound nice on the patch-init), they are also very affordable and available. I was honestly very surprised at how transparent they were. I’m also using some LEDs for some soft clipping before and after the ADC & DAC for even more headroom. Some Nuetrik 4:1 transformers recently arrived which i’ll test in a few weeks when I have some more time.

I’m now actually just super keen to make a little box to use in mixing/mastering that is 2ch in and out, with transformer for level drop, clip with led, then transformer for signal boost… with a nice audio interface its a really nice subtle way to add some life and also clip signals without aliasing… and its cheap! under $100 for everything including jacks etc