I have reached the end of my tether with VSCode/Cortex Debug.

So I am going to try an Eclipse setup, has anyone got any tips of going about this?

if you have any luck debugging in eclipse please let us know!

I got it working but my hatred for eclipse got the better of me and I went back to using VSCode/Cortex Debug!

I had a quick look, this is from a Mac.

For openocd I used the one that comes with STMCube32IDE. 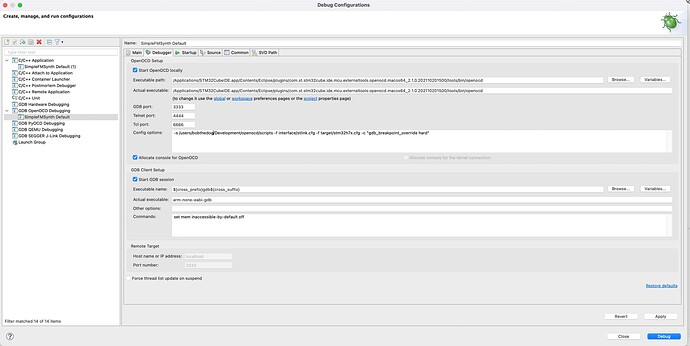 THanks! Also–let me ask—were you able to find an ideal debugging setup for VS code? I have been playing around a bit, trying the default Cortex setup as well as the Stlink setup. I do seem to remember that when I used to use Stm IDE i hated programming but that the debugging was somehow better

Exactly, the debugging is far better in Eclipse but the intellisense, editing and just general usability in VS Code is so much better.

It basically comes down to not using restart to start debugging again, rather stop it and start it again.

I will try to find some more info…

So this was the issue that I was getting:

I was also getting random issues with the variable windows, to fix these random issues the OpenOCD from STMCube32IDE was used. (using PATH on the Mac)

To fix the issue with restart, stop the debugger and then run from the start again.

here is the launch.json: